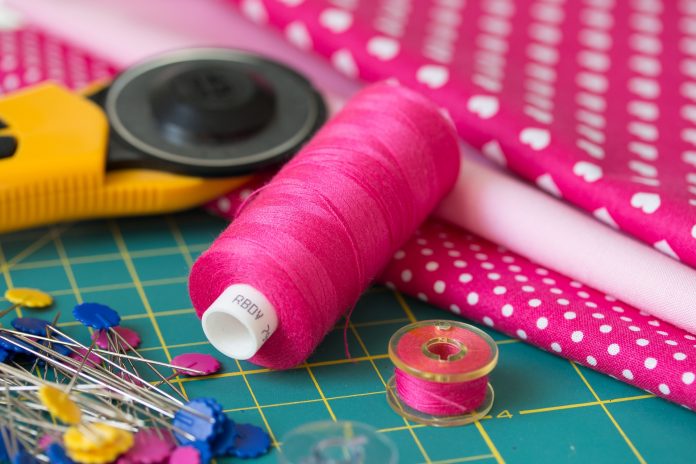 “Women quilters deliberately make mistakes in their quilts as only God creates perfection.”

AN OLD SAYING FROM THE AMISH

During September, the Sewing and Craft Alliance celebrates National Sewing Month, which began in 1982 when President Ronald Reagan dedicated the month in recognition of the importance of home sewing to our nation. His proclamation (#4976) declared that “tens of millions of Americans sew at home. Their efforts demonstrate the industry, the skill and the self-reliance which are so characteristic of this nation.”

Even though we honor this creative form of self-expression all year, September has held a month-long open house of retailers, bloggers, on-line stores and individuals who shared ideas, expanded their creativity and renewed their interest.

On June 13 each year, the National Sewing Machine Day honors an invention that “has kept us all in stitches” for over 150 years. Englishman Thomas Saint received the first patent for a sewing machine intended for leather and canvas in 1790.

No doubt many others remember, as I do, sewing a circle skirt in the late 50s in Home Economics class in high school. But such skills died in the 70s, 80s and 90s when women worked more outside the home, when “fast fashion” made home-sewn clothing more expensive than store-bought apparel, and when there was less time for home crafts.

Granted, Walmart, G-Street Fabrics and Joann Fabrics still cater to “do-it-yourselfers,” but with COVID, sewing machines are now in short supply, even those that were relegated to the trash or donated to Goodwill. After more at-home time increased, beginners and experienced sewers started hauling out old sewing projects like quilts, children’s stuffed toys and pet bedding. Sewing machine repairmen like Bruce Alltomari of Scott, PA, has been swamped with requests for repairs for old rusted machines or those with missing parts. He’s been in the business for 16 years and has never seen such interest as during these last few months.

Lower priced machines at $800 or less are hard to find, yet those under $3,000 are on back order. Since the pandemic, Goodwill reports quick sales for any that were donated.

The rage all started with face masks. People wanted to do something, and mask kits that sold for $30 that included elastic and fabric sold quickly. Gaiter kits for the same price did well, too. These are masks that tie around the neck and are pulled up to use as a mask or pulled down to look like a scarf. Gaiter kits are also available and online stores and video sewing lessons are highly desirable.

Alterations ladies and dress makers like Barbara Jenkins of Littlestown, PA, in her shop called “Handcrafted for You” have totally changed their practice since the pandemic. Since March, she’s made over 2,000 masks, each taking her 15-20 minutes, and requests are still brisk as her fabrics range from plain to sports logos to cartoon motifs.

She only sews the three-pleated masks with elastic ear loops, and the pattern she uses is best for health care workers because it’s a 2-ply cotton washable mask with a filter pocket, the same pattern being repeated and made on her basic Bernina machine. She asks for a $5 donation for each and doesn’t make a profit, but she says she is just filling a need as the donation goes for materials.

For nine weeks, her business was closed because the state of Pennsylvania deemed it non-essential and during that time, she stayed home and sewed masks. Since re-opening, Barbara is swamped with wedding dresses from weddings that were postponed, and she hopes she doesn’t have to return to mask making for awhile.

Dean Brinkle, chief marketing officer of SVP Worldwide which makes the Singer, Viking, Husqvarna and Pfaff brands of sewing machines, says, “Consumers have more time on their hands, so they’re pulling out that old sewing machine in the back of the closet and starting with masks because there’s only so much you can watch on TV. In March and April, we were literally sold out of machines and had 20 percent growth in all brands,” he stated. “Singer, which sells 56 models of sewing machines ranging from $99 to $400, saw an amazing spike in sales resulting in almost every brand being out of stock by the middle of April.”

Brinkle contines, “Now, we’ve got video classes online. We’ve got college students starting their own clothing brands, mostly personalized athletic and leisure wear. And we’re constantly looking for new ways to engage with customers like appealing to younger sewers and more males, especially boys who are making masks: 20 percent of our customers are men.”

“At Bernina sewing machines, the entry level $199 Bernette machine sold out in a few weeks,” reports Paul Ashworth of Bernina of America. “People were hauling out their old machines and then realized they wanted a new one, so by the end of April, you couldn’t find any below $500, and now today, we’ve got massive back orders for machines below $1,000. We’ve started an Instagram TV channel to post tips to the younger and newer sewers.”

“But even before the pandemic, repurposing, reusing and recycling old clothes was growing in popularity but because of the pandemic and more time, crafting has grown in popularity because people want quality, something personal and different and well made,” says retail consultant Pamela N. Danziger. In spite of recycling and using vintage castoffs, the U.S. Environmental Protection Agency estimates that all landfill waste is textiles and that the average American throws out 70 pounds of clothing and other cloth each year.

Home-sewn clothing is not cheap. “A light-weight 100 percent wool dress sewn at home will cost $150 in supplies alone compared to a synthetic fabric dress bought retail, but with one substantial difference—home sewn outfits last forever,” writes Laura Malt Schneiderman in the Pittsburgh Post-Gazette.

And it’s nothing new for people to return to sewing in uncertain times. Aneela Hoey, pattern maker at comfortstitching.typepad.co.uk says, “After the financial crash of 2009, people turned to sewing on Flickr to see what others were doing. Now they are sharing ideas on Instagram as I’m creating more patterns for tote bags and organizing pouches. Once you learn how to sew, you never forget how, and you can return to the skill whenever you want. Best of all, you have something tangible as a result.”

In addition is the therapeutic value of sewing, one particular quilter and sewer speaks for so many when she tells her story. Bonnie Kelly of Jacksonville, FL, says, “In this time of the pandemic, in the intense heat of this summer and in this chaotic political environment when people feel an overwhelming lack of control, it’s healing to be able to sew or quilt as I do. To have the ability to match seams and coordinate colors and patterns gives me control over some part of the day each day and for me, that’s healing.”

Like many others, Kelly’s grandmother learned to sew in Germany as part of her schooling and came to America when she was 21. She made her daughter’s clothes, taught her to sew and did alterations for people for extra income. “When my mother got married and had me, she made clothes for me and when I was nine, she taught me to sew. I joined 4-H and sewing was my love,” Bonnie recalls.

“When she got a new Kenmore machine that would do zigzag stitches, she gave me her old machine which I still have. When my own children were born, I continued the tradition of sewing their clothes. They picked out the fabrics and I even made my daughter’s prom gowns, sewed dresses for weddings, and did alterations. A group formed at our church called the ‘Craft Croup’ that combined sewing and crafts. The fellowship from that group through jobs and raising children lasts even today as we are a support team for each other.

“When my children started school, I graduated to quilting and learned hand quilting versus machine quilting, and how to choose fabrics, even some vintage fabrics from the 30s that we found in an attic. With my extra money, I bought an embroidery machine and fell in love with it. Every two years, I upgraded the machine and learned new techniques. Now, I’ve gone back to quilting during this time of COVID as crafts are not fun for me unless I work with others.

“Then, too, the cost of clothing decreased, and the price of fabric increased. I recently purchased the Baby Lock Altair sewing machine with an embroidery capacity for $9,000 but kept my old one. I watch YouTube tutorials and scour different shops online that not only teach but supply fabric and notions. I studied how designers and famous quilters store their fabrics so their collections are accessible and manageable.

“I just finished a beach scene quilt for my grandson from Suzy Quilt online, used a lot of my scraps and machine embroidered the background with fish, sailboats, mermaids and shells. The different shades of blue reflect the water’s depth. I bought a pair of gloves that helped me keep better control of the fabric. I watch videos and stop every few seconds to make sure that I am duplicating exactly what the quilter is doing, and I even made bias binding and mitered the corners.

Bonnie Kelly is indeed only one crafter, but she speaks for others as their skills have not only provided them with therapy, but have given us all tangible proof of the power of creativity and of giving love to others.