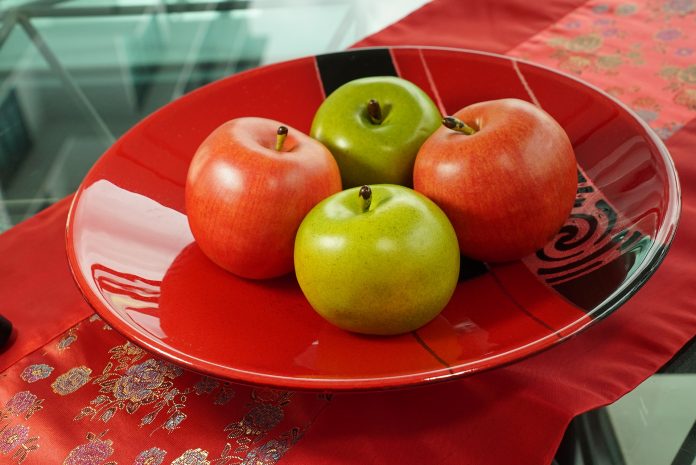 Tour any model home, and you’ll find popcorn in front of the TV or movie screen, cocktails on the end tables, desserts on trays in the dining room and a ready-to-carve turkey just out of the oven in the kitchen. These are tempting, realistic and give the aura of a welcoming home awaiting a loving family. The only problem is that these items, although realistic, are fake.

The History of Fake Food

But fake food is nothing new. Fruits and vegetables made of porcelain were displayed in 18th century Europe. Jade and alabaster plates of fruit date back to the Qing Dynasty in China. In Japan, fake food or sampuru, is displayed in restaurant windows. In the U.S., fake wedding cakes advertise a baker’s creativity and some are ordered as a visual addition to wedding receptions that later become keepsake memories. Even I pull out my mother’s rubber but real looking fruitcake during the Christmas holidays because all family members hate fruitcake, but it was a long-held holiday tradition brought over from Germany.

In the 1950s and 60s, fake food was popular and made mostly from blown glass, especially when tourists to Italy brought back glass apples, pears, tomatoes and cucumbers. Back here at home, fake fruits made of wax and plastic became decorator items, although some still consider it tacky. But to most, it denoted domesticity, home, and a middle-class attempt to look prosperous and artistic.

Now, fake fruit displays are being taken in new directions by some amazing artists. Real baked goods that have been preserved are being made into lamps by Yukiko Morita and sell for $80 to $300 each. She uses flour, salt and yeast, so it’s actual bread. After carving out the insides, she installs LED strips and reassembles each pastry with an epoxy resin to maintain its golden color and ensure that it will never spoil. Unfortunately, once the light burns out inside, you can’t replace the bulb.

Yukiko’s baguettes, croissants, and dinner rolls are baked and hand-assembled in Japan.  She developed her passion while working in a bakery but couldn’t bear that unsold items were tossed out at the end of the day. She wanted others to “appreciate bread’s beautiful allure,” so she collected unwanted baked goods and removed the insides like a surgeon to insert the lights before piecing it back together with resin. She even repurposes the centers into flavored, twice-baked biscuits and thus gives new life to unwanted breads through art.

An Oakland, CA, artist, Leanne Rodriguez, who goes by the name “Elrod,” started making fake gelatin salad lamps during the Covid shutdown. From mid-century cookbooks, she took recipes for gelatin salads and suspended vegetables, chopped fruit and hot dogs made of clay, in resin, alongside LED lights that give the artwork a glow. She calls her work “Mexakitchen,” and the pieces range from $100 to $3,500.

Jasmine Archie, 25 years old from East Austin, TX, creates colorful confections that are lavishly decorated and immensely popular. What’s ironic is that she doesn’t even like real cake that much, so while searching for ceramic cakes on Etsy for her birthday, she found a fake cake and ended up on YouTube watching tutorials and then made one herself. She posted it on her personal Instagram of 14,000 followers and people asked for one. She credits nostalgia for their popularity and says there’s huge hype around fake food now, particularly ceramic fruits and pies.

And throughout this pandemic, home décor trends of checkered rugs, animal prints, mirrors and 80s-style mushroom lamps exploded, so the fake cakes fit right in. But her cakes aren’t Grandma’s. They’re bright, colorful, and can be customized with personalized messages.

One request was for a neon green cake with a curse word written on top in bright pink cursive. Her tiny, one room studio is filled with cardboard cake frames, acrylic paints, piles of plastic fruits, hot glue guns, sprinkles, spackle, icing piping bags and bubble wrap cake boxes. She’ll do any color and take any request. The cakes are lightweight and realistic looking.

Jasmine admits the name for her shop came from the way her cakes looked when she first started, which is “Pretty Shitty Cakes.” She says the cakes bring people happiness because they mostly celebrate a special event. Pinterest claims she makes the best fake cakes on the Internet so she sells out within minutes of posting them with prices that range from $85 to $100. She plans to move into making pies and knows that her craft will evolve. Customers use them for home décor, to hang on the wall or for gifts.

John Derian, who founded a home décor and decoupage business in New York City, has had a fake cake in his kitchen for the last 14 years and has sold food-themed items like cakes, pies and doughnuts in his store for 20 years. He even offers elegant fake food such as cherries and bananas carved in Tuscany marble from the same quarry that Michelangelo preferred. Derian sells food-shaped candles by Cereria Introna, an Italian company founded in 1840 that makes all its candles by hand and is so busy with orders from the U.S. that it’s currently unable to fill them.

Mociun, a high-end jewelry line, sells faux glasses of spilled wine and melting ice cream cones next to its $10,000 engagement rings. The Brooklyn-based company began selling fake food in 2018 because Caitlin Mociun, the founder and designer, had a personal collection of fake food that she used in displays and for advertising in product shoots.  Customers asked if they were for sale so she offered them along with her jewelry, ceramics and glassware.

My personal favorites are the artificial mini-croissants, cupcakes, and sweet rolls, but to keep the family tradition alive, I displayed the rubber fruitcake again this year. After all, it will never spoil.