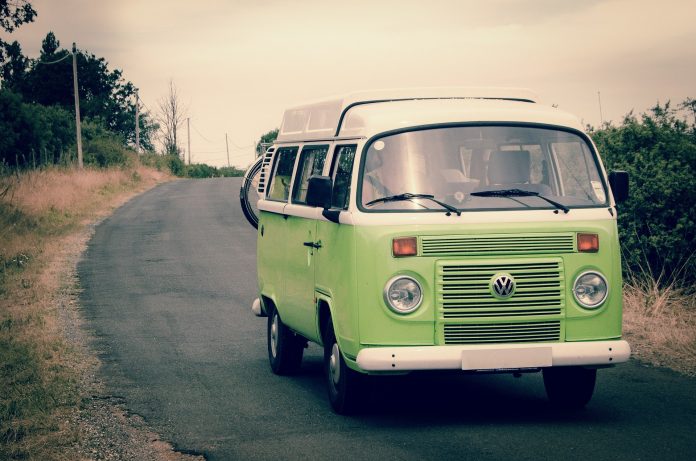 In 1949, Dutch businessman Ben Pon became responsible for putting the first Volkswagen Beetle on America’s roads. But it wasn’t just the little German bug that captured Pon’s interest; he was also intrigued by the plattenwagens—small, utilitarian, rear-engine trucks that zipped around the VW factory.

With these vehicles in mind, Pon sketched a vehicle that, to some, resembled an oversized loaf of bread. But VW executives loved Ben’s brainchild, and before long they green-lighted the now-iconic, slab-sided microbus. Using the same low-powered, air-cooled rear engine as the popular Beetle, the first bus rolled out of the factory in 1950 and gave the world its first look at what was officially designated the Type 2 Transporter. (Type 1 was the Beetle.)

In essence, the Type 2 became the first minivan.

The vehicle offered a cab-over configuration which placed the driver over the front wheels. As a design feature, this allowed for a wide-angle view of the road ahead, as well as leaving an extensive space behind the front seat for passengers and cargo. To many car enthusiasts, the Type 2 served as a counterpoint to the bulky, chrome-laden, gas-slurping American autos of the time.

Originally intended to transport families and campers, the microbus was adopted by surfers and, later, hippies as something simple, efficient and fun. Soon it was on its way to becoming one of the world’s most recognized (and coveted) vehicles. People quickly embraced its austerity. For example, interiors featured practical rubber mats, not carpeting, on the floor.

Before air-conditioning became commonplace, one appreciated early feature was the many windows that opened out all the way around the Type 2.

To surfers, the VW microbus became the prized board-hauler of choice, preferable over a “woodie” (a wood-paneled station wagon) or a delivery van. When the surfing fad faded, counter culturists adopted the vehicle. “The hippie movement fell in love with the bus for a few reasons,” proclaimed classic car expert McKeel Hagerty. “It was cheap to maintain, easy to work on and big enough to live in.”

To which Stewart Reed, the chair of a California design college, added, “The bus flew in the face of traditional social culture. It was anti-style, anti-success and rebellious in a totally new way.”

The main complaint about the microbus was its speed—or lack of it. The first models offered a meager 25 horsepower engine. (One can only imagine such a vehicle trying to ascend mountains or challenging hills.) Eventually, the horsepower rating was increased to 40, but the vehicle still proved too slow for many drivers.

In Disney’s Pixar movie Cars, the Fillmore character—voiced by George Carlin—is portrayed as a well-used—but not used up—1960s Type 2 with a license plate that reads 51237, Carlin’s birthdate of May 12, 1937. Fillmore’s name came from San Francisco’s Fillmore Auditorium, the home of numerous counterculture concerts.

Thanks partly to Cars, the peace-loving, organic fuel-dispensing Fillmore will ensure that the VW microbus will represent the ‘60s counterculture from now on.