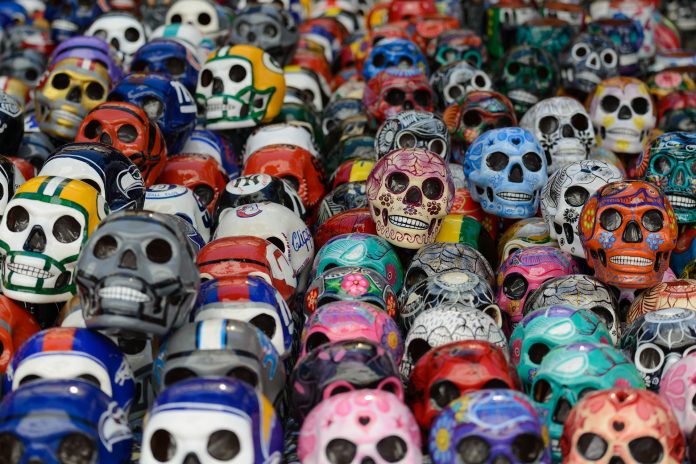 Modern day Halloween holds so much history, but mainly European. From trick-or-treating to the timing of the holiday itself, October 31 is all about celebrating harvest with spooky activities. But, just south of the United States’ border, Mexico has its own Halloween-esque practices.

What is Day of the Dead?

Day of the Dead, or in Spanish, Día de los Muertos, is the traditional Mexican holiday that spans over two days. During this time, family members remember and honor their dead relatives through lively celebrations. Families create altars at the grave site of the deceased, complete with candles, brightly colored marigolds and the dead’s favorite food and drink. These offerings and altars are meant to call upon the passed family member(s) and invite them from the land of the dead to celebrate with living family members.

The celebration of the dead actually happens in designated fragments throughout the two days. First, at the stroke of midnight on November 1, Día de los Angelitos (Day of the Little Angels) begins. During the next 24 hours, the spirits of deceased children are said to visit their living family members. Families will create altars specific to the child with their favorite food, drinks and toys. The deceased child’s name is also typically carved or written on a sugar skull.

The following day, November 2 at midnight, begins Día de los Difuntos. This is a 12-hour period devoted specifically to the passed adults of a family. Similar to the way in which the deceased children are celebrated the night before, the adults are celebrated by placing alcohol on their altars (tequila, mezcal, atole & etc.). Family members will play games and dance near the altar to include the dead in their celebration.

At noon on the same day, November 2, starts the official Día de los Muertos celebrations. This is when all of the dead are commemorated in a more public manner, with parades and other costumed celebrations in town.

Although typically a more morbid symbol for Americans and other western cultures, a skull during Día de los Muertos is meant to familiarize people with death rather than leave it an taboo subject. Often, you’ll see skulls, whether painted on the living’s faces or even as hanging decorations, smiling. This is meant as a way to mock death, to show that it is not the end of a person’s soul, but rather the end of their physical being.

Similar to other cultural practices surrounding death, flowers are placed on altars and graves of loved ones as a symbol of the temporality, fragility and beauty of life. However, Mexican marigolds are specific to the country’s Día de los Muertos due to their bright colors and pungent smell. It’s believed that both of these factors help guide the dead to their altars in order to attend their celebration with family.

One myth created and still respected in Mexico today is that of the cempasuchil flower. The myth consists of the tragic love story in which two young Aztec lovers, Huitzilin and Xóchitl, are separated by death through war. Xóchitl implores the sun god, Tonatiuh, to reunite her with her lost love. In response, she is turned into the cempasuchil flower (or Mexican marigold) and is then visited by a hummingbird, thought to be Huitzilin. The flower and hummingbird are reincarnated versions of the lovers so that they might still be together in the next life.

For this reason, the cempasuchil flower is used as a traditional Día de los Muertos flower to represent new life through blessings of the sun.

Another symbol you will see that is heavily associated with Día de los Muertos is that of the monarch butterfly. The reason for this is that it’s believed that these festive, fluttering insects hold the spirits of the deceased. The reasoning behind this is that monarchs make their winter migration to Mexico around the very end of October and start of November, a timely coincidence that led to many natives believing the butterflies were the souls of the dead making their return for Día de los Muertos.

The overarching mentality of Día de los Muertos is best summarized by the Day of the Dead website: “Our dead are never dead to us, until we have forgotten them.” This unique and beautiful celebration of death among the living is a reminder to both Mexicans and those observing internationally that the only separation in death is that of physicality. Take the time this weekend to remember your own passed loved ones in a celebration of who they were when alive with their favorite meal, game or movies.

Recipe: This is so gnarly, dude!