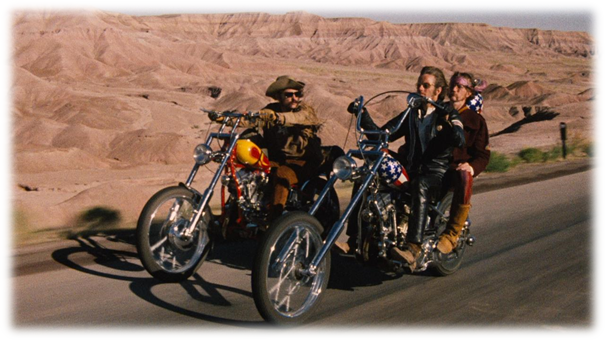 Get your motor runnin’, head out on the highway

Lookin’ for adventure and whatever comes our way

“Easy Rider” was the ultimate epochal, and ultimately doomed, buddy picture, a movie replete with drugs, rock ‘n’ roll, sex and violence as elements of the seductive allure of freedom in life that the open road can offer.

As Captain America (a well-groomed, leather-clad Peter Fonda) and Billy (a slovenly, fringe-jacketed Dennis Hopper), the pair journey across America in an attempt to abandon mainstream life for one sans responsibility. Flush with cash from a Los Angeles cocaine deal (which features a cameo appearance by record producer Phil Spector, who hands over the money), the two modern-day cowboys roar east on flashy motorcycles, bound for Mardi Gras and, eventually, a cushy retirement life in Florida.

“Easy Rider”, whose script began as “The Loners”, is all about freedom—what it means and what it costs. Filmed in 1968, it took a year to edit 80 hours of often-freewheeling guerrilla footage down to a marketable 95-minute offering.

Fonda and Hopper, the film’s producer/director team, found Columbia Pictures’ bean counters reluctant to dole out adequate funds for the endeavor. So tight became the allotted budget that the idea of an original music score was scrapped in lieu of using rock singles on the soundtrack.

Throughout the odyssey, a reflective Captain America seems to appreciate and respect everything and everyone he encounters, whereas Billy stumbles about in a pot-induced fog while rhapsodizing about the hedonistic bacchanal that awaits in New Orleans. On the way, they meet an alcoholic ACLU lawyer named George Hansen (Jack Nicholson, at the time a virtual unknown). George decides to head east with the two but is brutally murdered after all three unintentionally stir up trouble at a small-town Louisiana café. Following a nightmarish LSD trip during Mardi Gras, Captain America and Billy continue their travels.

Writer Terry Southern worked on the script with Hopper and Fonda and later told “Creative Screenwriting” that the original idea had been to portray the pair sailing off into the sunset out of Key West at the movie’s end. Southern said, “It wasn’t until the end that it took on a genuinely artistic dimension—when it suddenly evolved into an indictment of the American redneck, and his hatred and intolerance for anything remotely different from himself.” The shocking demise of the two bikers comes at the hands of a shotgun-wielding assailant.

After Peter Fonda previewed the movie for his father, the legendary Henry (who had worked in mainstream motion pictures for 35 years) admitted to his son, “I’m worried about it because the film is inaccessible… I just don’t think many people will get it.”

Not so. Aimed at the high school and college-age audience, “Easy Rider” offered an unflinching look at the dying days of the 1960s counterculture. Shot on a shoestring budget of $900,000, “Easy Rider” raked in $60 million dollars at the box office and garnered a Best First Work award at the 1969 Cannes Film Festival.

What Brain AND Body Exercise Can Do For You