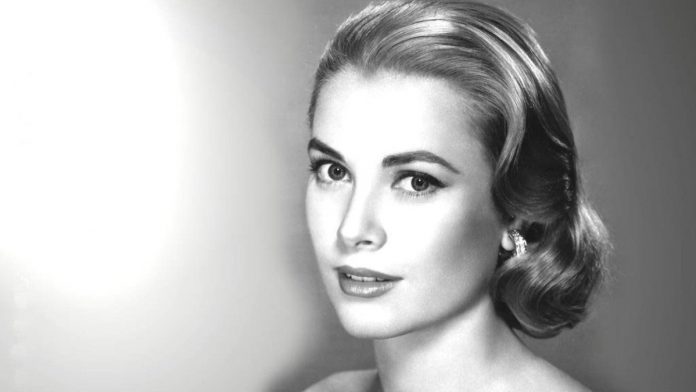 You know her as Grace Kelly, the American actress who starred in several major movies in the mid-1950’s and became Princess of Monaco by marrying Prince Rainier III in April of 1956.  Born in 1929 in Philadelphia, she graduated from the American Academy of Dramatic Arts in 1949 after paying $1,000 a year and staying at the Barbizon Hotel for Women in New York City. She funded her degree by modeling and began appearing in New York City productions, many broadcasted in the 1950s Golden Age of Television.

But at 26, she left acting and became Princess of Monaco after meeting Rainier at the Cannes Film Festival in 1955. Grace held citizenship in both Monaco and the United States. For her first public appearance following her engagement announcement, Kelly chose a gown by Christian Dior and established herself as one of the firm’s most loyal clients for the rest of her life.

Kelly and Rainier III married after a year-long courtship in a 16-minute ceremony that took place in the Palace Throne Room of Monaco in 1956. Their reception was attended by 3,000 citizens, but the church ceremony the next day was watched on TV by over 30 million and has been described by biographer Robert Lacey in 2010 as the, “First modern event to generate media overkill.” Her wedding dress was worked on for six weeks by three dozen dressmakers.  Afterward, the couple went on a 7-week Mediterranean cruise on the Prince’s yacht.

The couple had three children. Grace gave up acting to perform her duties as princess and became involved in philanthropy. She supported local artisans and in 1964 was a consultant to UNICEF and UNESCO. She died at age 52 in 1982 from injuries sustained in a car crash following a small stroke. She’s listed in the America Film Institute’s 25 Greatest Female Stars of Classical Hollywood Cinema. Her son, Prince Albert, established the Princess Grace Awards in 1984 to recognize performers in film, theatre and dance. The Princess Grace Awards have awarded 800 artists in more than 100 U.S. institutions with more than $15 million and remains active.

Her childhood home was made a Pennsylvania historical landmark. She was inaugurated into the International Best Dressed List Hall of Fame in 1965 after being listed as the “Best Tailored Woman” in 1955.  In 1956, Kelly was photographed carrying a Hermes leather handbag which to this day is called “the Kelly Bag.”

On the 50th anniversary of her marriage, the Philadelphia Museum of Art exhibited her wedding dress and a retrospective of her wardrobe was held at London’s Victoria and Albert Museum in 2010 and in Australia in 2012. The exhibit “Grace Kelly: Style Icon” paid tribute to her impact on fashion and included 50 of her ensembles.

In 2009, a plaque was placed on the “Rodeo Drive Walk of Style” in recognition of her contributions to style and fashion, and her legacy as fashion icon still continues.  Modern designers like Tony Hilfiger and Zac Posen cite her as an inspiration.  She’s remembered as popularizing the “fresh faced” look of wearing little make-up, having bright skin, and featuring her natural beauty which was termed the “college girl look” because it was simple and sophisticated.  In 2016, Forbes included her on the list of “10 Fashion Icons and The Trends They Made Famous.”

Kelly was featured on the January 31, 1955 cover of TIME magazine and was so respected that journalists called her “the lady” or “Miss Kelly” because she often wore white gloves and hats.   Recently, her Foundation launched Grace de Monaco, a luxury brand, and their first fragrance, Promenade sur le Rocher, was named after the Prince’s family’s official residence. A rose garden in Monaco was opened in 1984 and a hybrid tea rose is named after her. The Princess Grace Irish Library contains over 9,000 books and sheet music and the streets in Nice, France and Monaco are named after her, particularly Monaco’s most important and expensive street in the world.

Kelly has appeared on a U.S. postage stamp and on a Monaco commemorative coin. A yacht in Monaco is named after her and various hotels have established suites inspired by her.  According to J. Randy Taraborrelli’s book, “Once Upon a Time: Behind the Fairy Tale of Princess Grace and Prince Rainier,” everyone benefited from “the Grace Kelly effect.” MGM made millions of dollars from her films and even Monaco relied on the princess’ allure to attract millionaires to this tax-free haven.

But now, to the best news of all: at Hillwood Estate, Museum & Gardens, owned by Marjorie Merriweather Post, in Washington, DC, the newest exhibit that runs from June 11, 2022 through January 8, 2023 will be the first in North America of entirely Christian Dior ensembles from Kelly’s wardrobe on loan from the Prince’s Palace of Monaco. Forty ensembles, representative of her long-running collaborative relationship with Dior’s creative director Marc Bohan, will be featured along with 16 pieces of jewelry from her collection.

“Like Kelly, Hillwood founder Marjorie Merriweather Post was a tastemaker who carefully curated her image, choosing practical, yet elegant pieces for her active lifestyle and treating her apparel as she did her collections, as a connoisseur,” says Kate Markert, Executive Director of the Hillwood Museum. “We are thrilled to expand Post’s fashion narrative by showcasing Kelly’s place in the world of 20th-century haute couture.”

Most of the clothing dates from the 1960s and 70s that Bohan created for her, “inspired by her royal life style and understated chic taste.” Newsreels, sketches from Dior, photos and magazine covers will enhance the techniques used by Bohan that Grace admired. Hillwood’s Associate Curator Megan J. Martinelli’s favorites are the “Flowers and Sketches of the Princess’ Lifestyle” because Grace, Dior and Marjorie Post were all inspired by gardens and flowers that celebrated their shared passion with beautiful silk mousseline gowns printed with floral motifs.

The “Sketches of the Princess’ Lifestyle” also features reproduction color sketches of elaborate hairstyles created by French hair designer Alexandre de Paris. Included as well are reproduction sketches of set and interior designs for balls and events held at the Prince’s Palace during Grace’s lifetime, and best of all, two original press packet sketches personally delivered to the Princess from the House of Dior include fabric swatches.

Most exciting is that this is the first time such fashion and mementos of Grace’s will appear in North America, although the exhibit originated at the Musee Dior in Granville, France. It will offer 83 pieces that will give viewers insights into Grace’s life and her image that was created in response to Hollywood’s wish for glamour and the desire for elegance at the same time celebrating her enduring partnership with Marc Bohan.

Pairing her fashion acumen with that of Marjorie Merriweather Post was a stroke of genius because both chose smart, elegant pieces, paired them with stunning jewelry, and were connoisseurs in the world of haute couture. What an opportunity to meld the two women’s prominent place in history that resulted in philanthropic efforts that last to this day.

Both represented etiquette, both embodied understated, sophisticated style, wealth and privilege, and both became legends and role models for others as they were socially engaged and they personified commitment to others.  As Kelly once said, “I think women can do anything they decide to do,” while Post said, “I want young Americans to see how someone lived in the 20th century and how this person could collect works of art the way I have… I want to share this with the rest of the world.”

Now, thanks to both Marjorie Post and Princess Grace, the rest of us can enjoy all the best they brought to our lives.