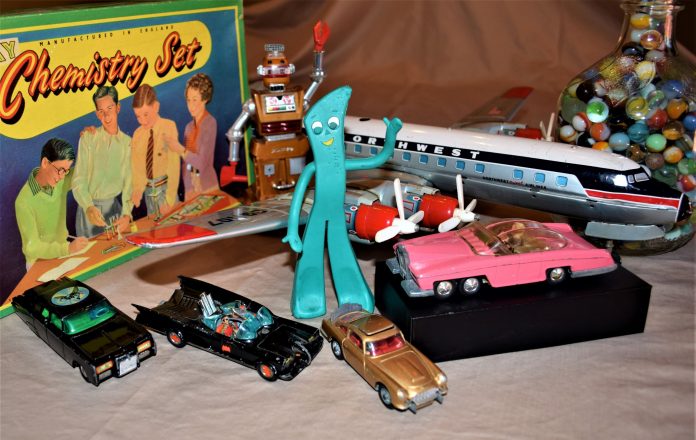 Favorite toys probably top the list of fond childhood Christmas memories for many adults. What were yours? Some of my favorites are listed below:

Memories of Christmas Toys Past

Bubble Solution: I blew my first bubbles one joyous Christmas around the age of seven. You’ve got to applaud the guy who came up with this idea. “Hey, I know,” he said to himself one day. “I’ll put soapy water in a bottle and sell it to kids.” Genius.

Hula Hoop: My favorite trick was flicking the hoop along the ground with a backspin causing it to roll back towards me. But I never developed any interest in its traditional use. Watching friends frantically wrenching their necks and backs to twirl the hoop around their spines merely convinced me these colorful rings of plastic were invented by a chiropractor.

Pogo Stick: While kids today must dress like gladiators in protective gear before engaging in physical activities with some outdoor toys, we bounded unprotected over rock-hard concrete for hours on these spring-loaded metal sticks, blissfully unaware we were potentially just one bounce away from a trip to the ER.

Chemistry Set: Got mine at the age of 10 and it inspired me to get a Ph.D. in chemistry some two decades later. Sure, I performed some incredibly dangerous experiments, once ending up in hospital as a teenager, but burning a hole in your shoe (and, subsequently, foot) with molten zinc built character.

Gumby: While I generally took care of my toys, only one bendable green Gumby figure made it to adulthood (mine and his), the others falling victim to fiendish experimentation from a curious kid armed with a chemistry set. In one ill-conceived experiment, I attempted to create a ‘silver’ Gumby by dipping in the aforementioned molten metal, only to discover that rubber toys (and shoes) did not survive at 787 degrees Fahrenheit.

Mouse Trap: This board game involved assembling some 2-dozen mostly plastic pieces which, when perfectly aligned, would set in motion a chain-reaction to trap an opponent’s game piece. Delightful when it worked but infuriating when the mechanism malfunctioned. I still have mine from the 60s with all pieces intact – rather amazing considering threats of adjusting the unreliable mechanism with a hammer were not uncommon amongst frustrated young players.

Tin toys: First made in the mid-1800s, these colorfully painted metal figures and vehicles fell out of favor after the emergence of cheap plastic toys. My favorite, a Northwest Airlines DC-7C from the 60s, still works and always delighted my mother, too, who had been an air hostess on similar prop aircraft a decade earlier.

It’s no surprise, therefore, that favorite old toys can evoke distant but fond memories of family Christmases past.

Nick Thomas teaches at Auburn University at Montgomery in Alabama, and has written features, columns, and interviews for many newspapers and magazines. See www.getnickt.org.

Spring Craft Fairs in Your Area

Outdoor Living: Tips on How to Stay Cool and Comfortable