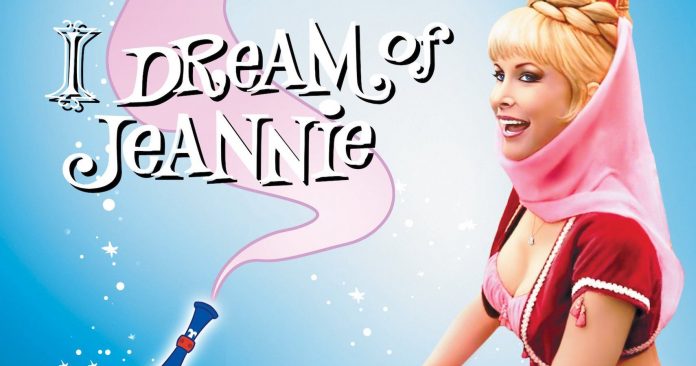 It’s the 1950s. Gorgeous, blonde Barbara Eden sits in the Hollywood office of a Warner Brothers casting director. “You’re a very nice girl from San Francisco,” the man explains with a grin. “But I really think you should go home and marry the boy at home. This isn’t the town for you. You’re just not pretty enough.”

Eden didn’t follow his advice, however, and when she was cast later in the TV adaptation of “How to Marry a Millionaire,” Barbara became a respected comedic actress. Eventually, she won the role that brought her superstardom as the bottle-dwelling beauty on NBC-TV’s “I Dream of Jeannie” series. The hit show was inspired by the 1964 movie “The Brass Bottle.” Originally a 1900 novel, it later became a film that featured Tony Randall, Burl Ives and—lo and behold—Barbara Eden.

The opening show, set on a deserted island beach, saw Captain Nelson stumble across Jeannie’s bottle home, where she had been imprisoned for two millennia. Soon, in a puff of pink smoke, the striking beauty was set free—and that’s when the fun began.

The show’s success meant keeping network censors busy trying to maintain a morally upright offering. Even though Jeannie slept in her bottle and Tony in his bed, it could never be shown that the bottle was in the captain’s bedroom. (They weren’t married until the fifth and final year of the show.) Along the way, some morality-oriented gatekeepers groused about her parading around in a “nightie.” Eden dismissed that, explaining, “It’s what she wore during the day. That was her dress, that was her uniform.”

Finally, some feminists protested that Barbara subjugated herself to Hagman. This brought about her miffed response: “She called him ‘master,’ but who was the real master there? She was…She wasn’t his subject; she was his equal.”

Larry’s solo star turn would arrive later when, in 1978, he became infamous as the ruthless oil baron J. R. Ewing on the CBS-TV nighttime soap-opera “Dallas.” Its success allowed him to abandon comedy.

“Jeannie” creator Sidney Sheldon (later the author of 18 hit novels) has admitted that not all went swimmingly on the “I Dream of Jeannie” set during its five-year run. “The problem was Larry Hagman,” Sheldon has candidly admitted. “He wanted to be the star…[But] It was Barbara who was getting all the magazine covers and interviews. Larry wanted to show the world that he could be as successful as his mother…I began to write scripts to build up Larry’s character and make him more prominent. But when an actor is in a show with a scantily clad actress as beautiful and enticing as Barbara Eden, it is very difficult to become the star.”