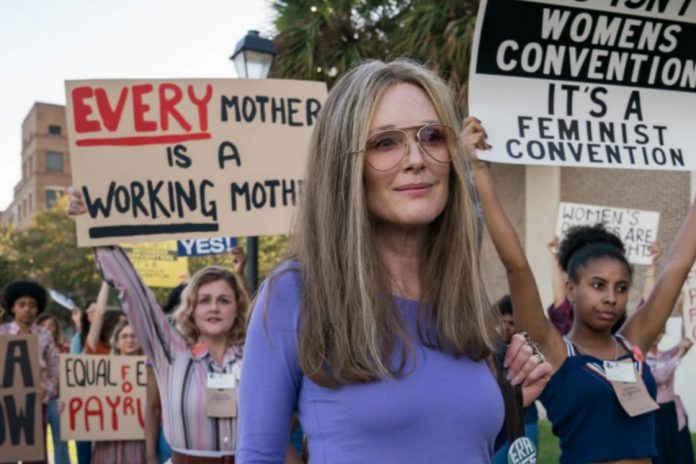 “The truth will set you free. But first it will piss you off.”

At last. A worthy biopic on the life of one of the primary movers and shakers of the women’s liberation movement. Premiering in January 2020 at the Sundance Film Festival, Julie Taynor’s “The Glorias” received three standing ovations at the prestigious gathering. Later, “Ms” magazine co-founder Gloria Steinem enthused, “Telling my story in Julie Taymor’s genius movie carries my hope that we all have a right to tell our stories.”

The film showcases four stages in the icon’s life. Young Ryan Kiera Armstrong portrays Gloria as a child growing up in provincial 1940s Ohio. Lula Wilson is Steinem as a teenager, and Alicia Vikander plays Steinem as a young woman. Finally, the incomparable Julianne Moore brings us Steinem as a mature activist and celebrity spokeswoman of the 1970s and beyond.

On each leg of the story’s journey, Taymor offers vivid details of Gloria’s life. Timothy Hutton portrays Steinem’s happy-go-lucky father, Leo, who helps to hold the family together—Gloria has an older sister—while homemaker mother Ruth is trapped in a spiral of depression and anxiety. Steinem learns that her mother once wrote a newspaper column but had to hide the fact that she was a woman by writing under a pseudonym.

Steinem becomes a writer herself and lands a plum job with the “New York Times”. But her editor insists that she compose only fluffy fashion pieces when not busy brewing the office coffee. Steinem quits after her boss invites her to a hotel room. Her next stop is at “Show” magazine, where in 1963 she goes undercover as a Playboy bunny and later writes “A Bunny’s Tale” about the wretched conditions that women who work there must endure.

To draw attention away from her good looks, the strikingly attractive Gloria adopts a parted-in-the-middle hairstyle and tinted aviator glasses. However, this isn’t always successful: On one TV talk show, the leering host comments on Steinem’s “sex object” looks, then asks her why she’s not married.

She becomes a “name” after she covers an important abortion speak-out in 1969 for “New York Magazine”. Steinem then graduates to speaking engagements and connects with other women—of all races and classes—involved in the feminist movement. In the story, we are also privy to the down-and-dirty backroom politics of the nascent movement.

Based upon Steinem’s 2015 book “My Life on the Road” and scripted by Taymor and playwright Sarah Ruhl, “The Glorias” releases in September.