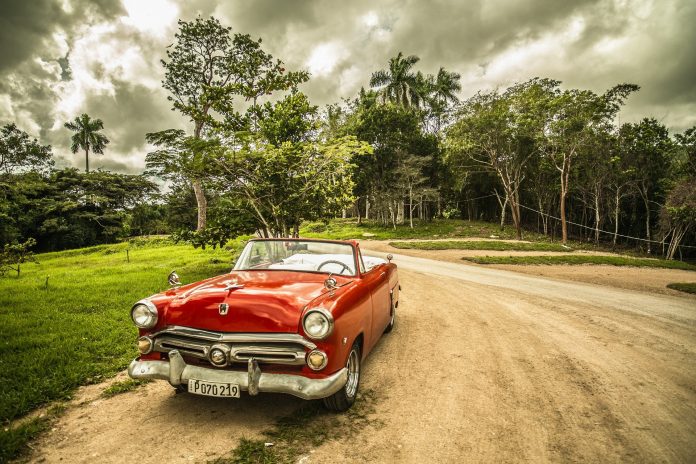 My very first car was a yellow Jeep. It was one of those miniature cars for the under-10 set that were propelled by pushing alternate foot pedals. My Jeep was patterned after “NellyBelle” the Jeep driven by Roy Rogers’ sidekick, Pat Brady. She was also my first vehicle to have a name.

During my last employment, my friend and co-worker Jim, drove his 1973 MG Midget convertible named “Phoebe” to work while I drove “Fiona,” my wife’s 1996 Toyota Paseo convertible. Convertibles are meant to be converted, so yes, even during wintertime, our tops were down while the heaters were turned up to eleven and the fans were blasting at top speed.

My best friend in Tampa (who drove a Jaguar named “Excalibur”) facilitated Joy’s and my first trip to England and gifted the two of us with custom European license plates for the fronts of our vehicles.

The plate on Joy’s vehicle read “Fiona” (which she has named all of her vehicles ever since). I named my 2002 hardtop Kia Sentra “Nigel,” but my tag read “NRD-2002”, which represented its full-name “Nigel Rice-Davies.” Quite often, I found myself having to explain to people that the “NRD” did NOT stand for “nerd”.

Sadly, we now once again find ourselves being a one-car family, “Fiona” is a hardtop Ford Expedition, grayish in color, but could be easily found in a parking lot the size of the Sahara Desert.

I’m happy to report that our single-vehicle status is about to change.

During my last trip to Dubai, I was walking along the beach when I chanced upon a man sitting on a towel, moaning in pain from an aching, swollen foot. Upon close examination, I found a large thorn in his foot, removed it and dressed and bandaged the wound. As it turned out, he was Sheik Pallah Abdul, and out of gratitude he is rewarding me with as many cars as my heart desires. I plan to name them all after hurricanes.

Mike Wright can usually be found watching “Wheel of Fortune” each evening. If you have car names to share, send them to micwrighthamo@gmail.com

Book Review: The Power of Age, A Blueprint for Maturing with Style