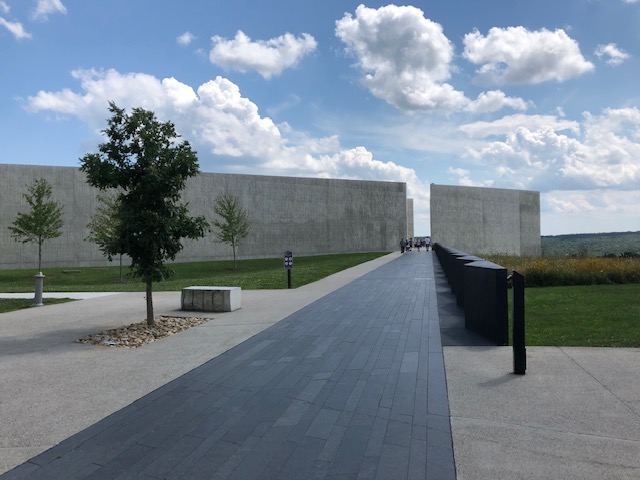 Article and images from Kathy Megyeri

Not long ago, I visited the Flight 93 Memorial outside Shanksville, Pennsylvania, for the third time because I continue to be moved by its serenity and beauty in the midst of a Somerset County, PA, field.

The memorial marks the first time that terrorists used commercial airliners as weapons to destroy a target, commit mass murder and spread national fear. On my previous visits, hay bales along the road were covered with flags, flowers and handwritten tributes but now the national memorial is complete. It’s a testimony to the importance of this site that upon entering the visitors’ center, attendees quietly don headsets to hear the cockpit voice recorder with its shouts, thumps, sounds of breaking glass and crash.

In silence and awe, visitors pay homage to the unarmed 33 passengers and 7 crew members who thwarted and defeated the terrorists’ plan only 18 minutes flying time from Washington. Six minutes of struggle kept that airliner from reaching the designated target. At 10:03, it crashed upside down at 563 miles per hour. Outside the visitors’ center is the impact site marked by a huge boulder. Nearby is the debris field and woods beyond which mark the final resting place for the passengers and crew.

The memorial also consists of a flight path walkway, a memorial plaza, the Wall of Names and a “Tower of Voices” that stands 93 feet tall in a musical tribute at the gateway to the memorial. The Tower contains 40 wind chimes rung by the passing wind to represent their voices.

This year will mark the 20th anniversary. On Saturday, September 11 at 9:45 am, a ceremony of commemoration will be held, the names of the passengers and crew will be read, a wreath will be placed at the wall of names and the bells of remembrance will be rung. Gates will open at 7 am and the ceremony will be held outdoors, no matter the weather.

I realize most Lifestyles readers will not be able to attend the ceremony, but I hope each will pause and briefly reflect that morning to honor those who made a collective decision by vote to rush the terrorists and retake the plane. Ironically, that same day this year is Patriot Day and a National Day of Service and Remembrance. Thanks to Congress that designated the crash site as a national memorial in 2002, the story of Flight 93 will live on to inspire others and honor those 40 heroes who are lost forever.

The Best Ways for Seniors to Stay Cool in Summer