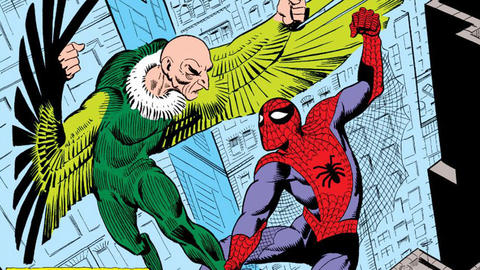 It was the late 1950s, and comic-book sales were stagnating. So was the enthusiasm of Marvel Comics creator Stan Lee, following two decades in his high-pressure, often-chaotic world of work. He later recalled to Rolling Stone Press, “I got to thinking, ‘Why not try something different?’ Something I’d like to read. No more cardboard characters and predictable stories where the hero is 100 percent good and always wins, and the bad guy is 100 percent bad and doomed to lose…”

Lee eventually came up with a unique idea—a fairy tale for adults. “My formula became: Let’s suspend disbelief for a moment and accept that a character can fly through the air, climb on walls or have the strength of fifty men. What would his life be like if he lived in today’s world?”

In August of 1962, he introduced Spider-Man to the world, a character supposedly inspired both by Lee having watched an arachnid crawl up a wall, as well as the memory of one of his favorite childhood comic books: The Spider, Master of Men.

Spider-Man is a timid, nerdy, genius-level teenager named Peter Parker. While visiting a science exhibition about radiation one day, he is bitten by a radioactive spider. Following numerous mutations in his body, Parker finds himself gifted with the proportionate strength and agility of the arachnid, as well as a “spider sense” that warns him of nearby danger.

His new body has the agility, balance and bodily coordination beyond that of the finest human athletes. But Parker himself still remains a teenager with everyday problems that include allergy attacks, money woes, acne issues, dandruff flakes and striking out with the girls he meets.

To avoid having others recognize him when he employs his amazing powers, Parker adopts a red-and-blue costume, as well as his superhero name, in order to conceal his true identity. He also creates and wears a pair of wrist-worn “web shooters” to approximate an arachnid’s web-spinning abilities. The shooters can spew a unique fluid which solidifies to various thicknesses upon exposure to air, forming sticky ropes of webbing. Parker spins such webs only when needing to capture bad guys, some of whom would fill a rogue’s gallery of the world’s most notorious comic-book criminals. Among them are Vulture, Doctor Octopus, Scorpion, Shocker the Lizard, Venom and Carnage.

As comic-book kids had usually been portrayed as mere sidekicks to larger-than-life protagonists, Parker’s character was quickly embraced by teenage readers. Spider-Man soared to unimagined heights when given his own series beginning in March 1963. Eventually Lee’s character surpassed even the formidable Superman in sales, reigning as the world’s largest-selling comic periodical for several years.

When Lee first described the soon-to-become icon idea to his publisher, Martin Goodman, Goodman had sneered and harrumphed, “Yech! Who wants to read about spiders? People hate spiders!” He finished with, “I can’t see that as a name for a hero or a series at all!”

Perhaps you couldn’t, sir, but loyal and enthusiastic Stan Lee fans certainly could.