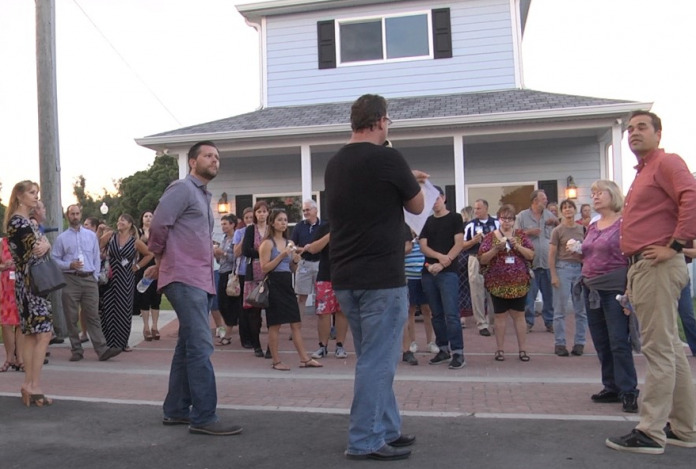 Something bright and bold is taking place on Park Boulevard—it’s experiencing an art renaissance of sorts, with vibrantly painted murals, fun sculptures, and unconventional buildings, including the construction of one made from shipping containers. Called Donelly COVE, the live-work unit facility was featured on HGTV.

Every fourth Saturday, beginning at 4 p.m., the city of Pinellas Park hosts an Art Walk, which provides an opportunity to meet the creators, see demonstrations and discover hidden treasures. The next one will be held on Jan. 25.

The monthly Walk and other creator-led events have drawn the broader Pinellas Park community to the City’s first genuinely walkable area.

As Lana Beck, Pinellas Park communications and government relations administrator, said, “It’s a place where residents and visitors can come together to celebrate creative activity and culture with a tremendous source of pride.”

The Pinellas Park community began developing a vision for a creative district in October 2015, after the Community Redevelopment Agency’s 2013 purchase of multiple 1950’s-era storefronts in the 5600 Block of Park Boulevard.

The Creative District, also known as Pinellas Arts Village, currently extends from the 5600 block north of Park Boulevard to the Park Station building located at 5851. The section is now home to the Swartz Gallery, Complete Sweet Shoppe, Limehouse Video, Pompei Monster Factory, Donnelly COVE, Pinellas Park Art Society, Painting with a Twist and the Studios at 5663 – a suite of ten affordable studios with a shared gallery.

The Bottles Pub, a local destination for decades, has embraced the village by creating an outdoor beer garden where creatives often gather as a central meeting spot.

It all builds on the City’s role as the location of the famed Beaux Arts coffeehouse where the likes of Jack Kerouac, Jim Morrison and a young Steven Spielberg came to multimedia musical performances, poetry readings, film festivals, dance performances and exotic galas. Though the coffeehouse is long gone, its imaginative lifeforce remains.

Beck adds, “Participating creators and businesses are in turn asked to contribute to its growth by working together to open their doors to the community, activate the area through collaborative events, and contribute to outreach and marketing efforts. This area continues to evolve with a growing number of arts and entertainment destinations and the continued support of the CRA.

Be sure to check out this Art Walk and get in touch with your creative side!