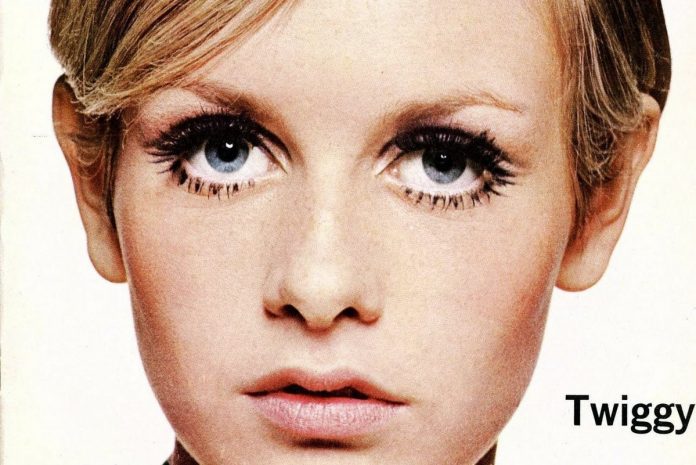 “I looked more like a young boy than a girl model.”

She became one of the world’s early supermodels, known by her first name only and possessed a unique look that defined the later 1960s fashion world.

Born Lesley Hornby in September 1949, she was the youngest of three daughters from Neasden, a working-class section of London. Her natural gauntness earned her the cruel childhood nicknames of “Olive Oyl” and “Twigs.” (Her first manager later promoted the name “Twiggy.”) Her mother had taught her to sew, and Twiggy used that skill to make her in-style clothing. She and her fashion-conscious friends would spend their weekdays planning what they would wear on a Saturday night out. Weekends found her at work at a London hairdresser while attending art school.

In January 1966, she had her hair colored and clipped short at the chic salon Leonard of Mayfair. Leonard himself had been seeking models to promote a new crop haircut of his. He hired a photographer to take headshots of the 16-year-old for his salon walls.

Before long, a fashion journalist from London’s Daily Express, the biggest newspaper of the day, noticed the pictures and asked to meet the young lady. A few weeks later, the newspaper published numerous photos of Twiggy, with the bold headline “THE FACE OF ’66.” She left school, became a full-time model and created a sea of change for a fashion renaissance in the UK.

Twiggy was always defensive about her natural thinness, and when asked what she ate, she always gave the same terse response: “Food.”

Nothing about her was typical. She was short for a model (5’ 6”), weighed only 91 pounds and had vital statistics of a 30-22-32 figure. (“I was a skinny schoolgirl, stuffing tissues in my little bra.”) Her androgynous sex appeal quickly brought her renown throughout the United Kingdom, where she modeled top designers’ clothes and adorned the covers of high-fashion magazines. Twiggy earned more in an hour than her carpenter father earned in a month.

When did her fame take off?

Her followers eagerly emptied store shelves of Twiggy lunchboxes, pens, cosmetics, dolls, bedding and dresses. She glided through London traffic in a Rolls Royce, and restaurant patrons sometimes offered a standing ovation when she went out to dinner.

In 1967, Twiggy pushed past her British boundaries to become a modeling sensation around the world. She experienced Beatle-like frenzy in America when the New Yorker magazine devoted nearly 100 pages to the short-haired, mini-skirted teenager who sported three sets of false eyelashes.

The remainder of the 1960s swirled by for Twiggy amid photoshoots, personal appearances, and interviews. She retired from modeling in 1970 to do more than pose for a camera and remained an English icon after establishing an award-winning career in dramatics and recording albums of pop music.

In 2019, she received one of the UK’s highest honors awarded to citizens in public service when she became a Dame Commander of the Order of the British Empire.

Hurricane Season: Regret and Repent, or Prepare and Prevent?