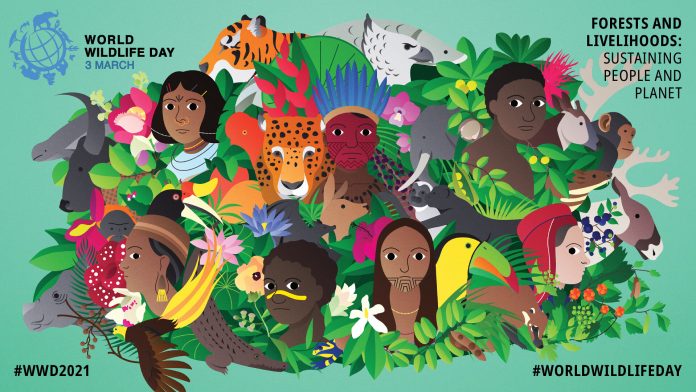 World Wildlife Day comes each year in March, this year on March 3; however, we can celebrate and cherish our wildlife every day. Challenge yourself to learn more about your local Floridian wildlife year-round, starting this month with the critters and creatures below. All information is from the Florida Fish and Wildlife Conservation Commission (FWC) website.

Believe it or not, Florida is home to these large mammals. Black bears in Florida tend to stay within their “home range,” or area that provides them their shelter, food and water, but can travel up to 50 to 120 square miles for male bears. They tend to choose areas that have a significant amount of “understory” or brush. These gentle giants tend to mind their business and land, so long as you do not provoke them, they easily coexist with humans.

Florida is home to two predatory cats: panthers and bobcats. The bobcat, about twice the size of a domestic house cat, isn’t too picky about where it lives in the state, they like the warm weather. Making a home in anywhere from the swamps to suburban backyards, these nocturnal mammals build their housing in places like hollow logs, tree hollows, caves, rock outcroppings and openings in the ground, according to Sciencing.com. Bobcats are currently at their peak mating season during March.

This big cat is similar to the bobcat in where and how they live. Typically, panthers can be found confined to the swampy areas of the Everglades and Big Cypress National Preserve. Whereas bobcats tend to hunt smaller rodents and mammals, panthers also indulge in hunting Florida’s white-tail deer and wild hogs, helping to keep populations at a manageable number. Panthers are considered a critically endangered species, susceptible to nearly every threat of extinction.

Although technically native to all of Florida, gray foxes tend to call the densely wooded, northern parts of the state their home. These tree-climbing, nocturnal mammals typically make a diet out of anything edible, including other small mammals and rodents, fish, berries and even insects. Although they are part of the Canidae family, and therefore “cousins” of our domestic pups, Florida foxes have been known to prey on indoor pets when they are outside at dawn or dusk, so be careful!

Found throughout the state, except for the Keys, these water lovers can be found in or near different bodies of freshwater, but more typically in rivers. Active at all times of day, river otters tend to nosh on small shellfish, like crawfish and turtles, and fish. These precious little creatures are not aggressive towards humans and are instead curious from a distance.

As always, do not interfere with wildlife you may see, whether it’s in your backyard or crosses your path during a hike. Admire any wild creatures from afar and snap a quick picture before moving on, if you like!